How bad were England?

The most even-handed headline I could find today on England’s 4-1 loss to Germany is BBC News’s “Germany knock out dismal England“, though I like the alliteration in the The Sun‘s headline “Fabio’s flops“. “Dismal” – that’s a strong word. Was the match really dismal? All the papers agree England’s performance was weak, and certainly you can’t say there was much in the way of decent defending from England but, from a historical perspective, was it all that bad?

The statistics I’m using come from EnglandFC.com for England data, and RSSSF.com for German data (using West German data for pre-1990 results – the data does not include the World Cup, so that’s been taken from the FIFA site). All data runs the range 1950-2010 – both England and Germany appear to have remained roughly constant over the period, so I’m basically using as much of the data as is meaningful (pre-1950, England did not often play internationally, and Germany was an extremely different country).

First of all, how has England done this World Cup?

So in all honesty, for England it’s not been a bad go round at all. We only made it to the last 16, not the quarter-finals, as we did in 2002 or 2006, but their second round matches those years were against the somewhat easier Denmark and Ecuador (ranked 20th and 36th in the world at the time respectively, versus Germany’s 6th).

So where does today’s horrible defeat come in? Well, the answer is simple: Gaussian statistics. This involve fitting a normal distribution – the famous “bell curve” – to events randomly scattered around a mean, works out the probability of a given result – IQ, for example, is modelled by Gaussian statistics. Height is another example. If we plot the England stats and fit a normal distribution to it, we get a pretty close match (a correlation score of 95%): 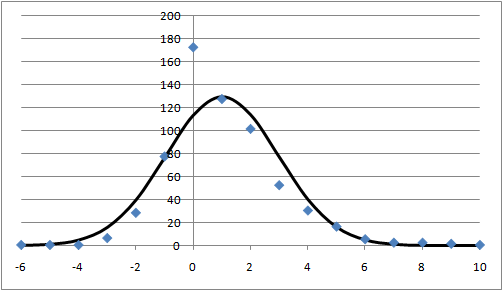 In short, what this graph shows is that, on average, England win games with a goal in hand but with a standard deviation of almost 2. What this means is, in short, 68% of England games fall within 2 goals of the 1-0 victory (because of the way the data is broken up, that means anything between a tie and a 2 goal victory). England also appear to tie far more often than they should, which I’ll put down to traditional cautious defending – the team generally plays for the tie in games where a win is not important.

But, 32% of games fall outside this range – in particular, on average, 16% of England games – that’s 1 in 6 – will have England lose (the actual data says 18%, which is pretty close). Letting in 4 goals in one game is bad, even by statistical standards, but it’s still happened a dozen or so times since 1950, and not even always against top-notch teams – just look at the most recent case, Wales beating England 4-1 for the Home Countries Cup in 1980. We were probably overdue a thrashing.

Finally, Germany’s results, compared with England’s, with each result shown as a percentage likelihood:

Goal differences of all England and Germany games since 1950

As you can see, Germany shows a small but significant advantage over England – in particular, where England play for a draw, Germany go for a win. Germany’s mean is slightly greater than our too; μ=1.11, σ=2.10. In head to head games we do little better. We were tied for wins with Germany 10-apiece if you include West Germany in the numbers; if you only consider recent performance, Germany edges ahead 4-3 (well, 5-3 now). Statistically speaking, this is a game Germany were never likely to lose.

Besides, the psychic octopus called a German win too, so I guess that clinched it.

This entry was posted on Monday, 28th June 2010, 0:02 GMT+0100 and is filed under Football, Graphs everywhere!. You can follow any responses to this entry through RSS 2.0. You can leave a response, or trackback from your own site.