Two sets of lies and disortions on the same story from The Sun and The Daily Express. Let’s tackle The Sun‘s first, in today’s “The Sun Says” editorial:*

Almost one million workless households are getting large handouts by claiming that every member over 16 is sick, injured or disabled.

That would make us the sickest and most accident-prone country in Europe – which we aren’t.

Really? Let’s have a look at the Europe-wide disability benefits statistics (PDF). The data are a little bit old (2005), but it’s the most recent I could find, and according to DWP statistics (PDF), the number of people on incapacity benefits has dropped slightly between 2005 to 2010 (from 1.83 million to 1.78 million (table 1.2 of the DWP data, p. 11)), so if anything, this data will be an overestimate.

Graph 1.1 of the European data (p. 17) conveniently shows the proportion of the UK population on incapacity benefits compared to all other EU countries. In fact, we’re 8th out of 25 in terms of the proportion of our population on long term disability benefits. True, we’re above (as The Sun would put it, “sicker and more accident-prone than”) Malta, Cyprus, Greece, Estonia, France, Germany and Slovenia, but we’re below Portugal, Latvia, Ireland, Slovakia, Italy, Belgium, Poland, Austria, Luxembourg, Estonia, the Czech Republic, Denmark, the Netherlands, Finland, Lithuania, Sweden and Hungary.

So the entire point of The Sun‘s editorial – that clearly there must be disability benefit fraud going on, since more people are on benefit than in any other European country – is nothing but a lie.

I’m not even going to touch the foul conclusion of the piece, where The Sun claims that if disabled people just “made the effort”, they could get a job easily. Instead, let’s move onto The Daily Express‘s coverage.

NEARLY one in five households in Britain has no one who works and is entirely dependent on taxpayer-funded handouts, shocking figures revealed last night.

In an indictment of the “shameful” benefits legacy left by Labour, the number of workless households rocketed by 148,000 last year to just under four million.

It’s an indictment of something, but not the benefits system. Year-on-year, the number of people claiming jobseekers’ allowance dropped from 1.18 million in 1999 to 0.81 million in 2008 (DWP paper, p. 6). Of course, in case The Daily Express hasn’t noticed, there’s been a bit of a recession lately and, sure enough, there has been an increase in unemployed households lately. The numbers may be correct, but the Express‘s interpretation of  them as indicating widespread fraud them is nasty and done in very bad faith.

There’s also some very stupid innumeracy when the Express tries to prove that divorce or single parenthood is somehow at the root of the problem:

Overall, lone parent households with dependent children were most likely to be workless, with a figure of 39.7 per cent.

In contrast, just 5.4 per cent of couple households, including married couples and those in civil partnerships, had no one in paid employment.

The Express finishes its report with a quote from your friends and mine, the TaxPayers’ Alliance:

John O’Connell, deputy research director of the TaxPayers’ Alliance, said: “Hard-pressed working taxpayers are being forced to foot these huge bills year after year as far too many households rely on benefits.

“If this issue isn’t taken on, it will be impossible to seriously tackle the fiscal crisis and taxpayers will continue to pay a high price for politicians’ failures.

“The Government needs to take urgent action to reform benefits as we need a simpler, fairer, more affordable system that gets people back in employment.”

How do we know that “far too many households rely on benefits”? Answer: we don’t. All the data released today tells us is that we have a roughly average number of people receiving state help, and that the number of people claiming benefits will increase in a recession. Hardly groundbreaking news.

* The Sun website replaces their Sun Says page each day, instead of archiving it like any other article. If you’re reading this after the 9th September, 2010, here’s a screencap. 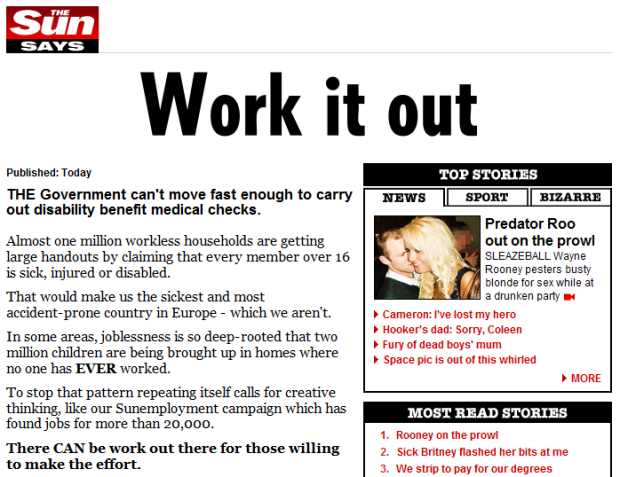 This entry was posted on Thursday, 9th September 2010, 13:43 GMT+0100 and is filed under Damned lies and statistics, Europe, It's the stupid economy, Not remotely true, Too scientific; did not read. You can follow any responses to this entry through RSS 2.0. You can leave a response, or trackback from your own site.