Pain in the asteroid 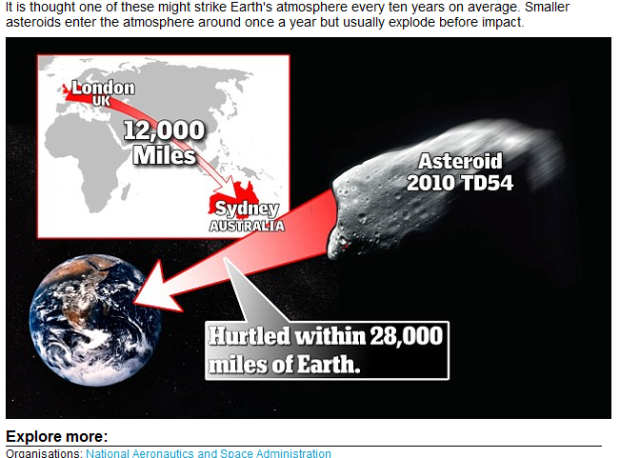 Some time yesterday morning, a GIANT asteroid SKIMMED PAST the Earth. Of course, you were probably aware of this from the breathtaking meteor showers, massive tsunamis, devastating volcanoes and dreary Aerosmith ballads that ravaged the planet in its wake. The asteroid, TD54, was so GIANT in fact that it was NEARLY THE SIZE OF A DOUBLE-DECKER BUS, The Mail informs us, presumably with pants wet from fright. Not even reassurances from NASA that the asteroid a) could not possibly hit Earth, b) was small enough to burn up in our atmosphere and c) that this sort of thing happens literally every day prevent the Daily Mail calling this a “close call” and a “near miss”.

Most interesting though is how the Daily Mail illustrates this article. The first image they use is a diagram from NASA of the asteroid’s route, which looks pretty to scale (though the asteroid is much, much larger than it should be) – I’ve got no problems with that one.

The second one is a pic from an article they ran a little while back. The article itself was absolutely stupid – I meant to blog on it at the time – as the Daily Mail apparently thought that the fact we discover more asteroids all the time meant the number of asteroids was increasing (they fixed it a bit since, but the captions still talk about the density of asteroids increasing). By the same logic, you could claim that the number of continents on Earth suddenly increased when America and Australia were (re)discovered.

The problem with that image in this particular article is that the Mail uses it to claim space is “congested” with asteroids – which it’s really not. It’s a small image, and to make the asteroids visible, the astronomer who created it made the asteroids much bigger than they should be – nearly the size of Earth, in fact. If you want a more accurate map, go to the nearest supermarket car park at night. Put a marble in the middle, then sprinkle a single pinch of salt across the entire car park. Those grains of salt are your near-Earth asteroids*, your marble is Earth. That’s a better picture of the Solar System.

The final image however is just brilliant. Clearly all this mundane NASA “rationality” had got on the nerves of the Mail‘s picture desk, and so they mocked up this: a terrifying asteroid RACING through space, following a bright red arrow as it plunges straight towards Mauritius. A giant speech bubble, inexplicably pointing to the arrow, yells “HURTLED WITHIN 28,000 MILES OF EARTH”, while a helpful map shows the distance from London to Sydney for scale (though for the record, it’s more like 10,500 miles, not 12,000).

Now, if you looked at that picture, you might think this asteroid was something to be scared of, so in the interests of keeping calm and carrying on, I’ve tried to produce a more accurate picture of the distances involved:

* For the record, astronomers have a 0-10 scale for working out the risk posed by an asteroid called the Torino scale. Out of the 7,000 near-Earth objects known, there are two that do not score “0 – No risk”, they both score “1 – Normal” instead. Only one object – Apophis – has ever scored more than 2, and that has since been downgraded to “No risk” too. TD54 scored a clean zero.

This entry was posted on Wednesday, 13th October 2010, 20:49 GMT+0100 and is filed under Space and astronomy, Total Perspective Vortex. You can follow any responses to this entry through RSS 2.0. You can leave a response, or trackback from your own site.