One thing The Mail normally does quite well are giant picture spreads – stories with lots of giant photos and maybe a couple of hundred words of text to explain them. Normally… 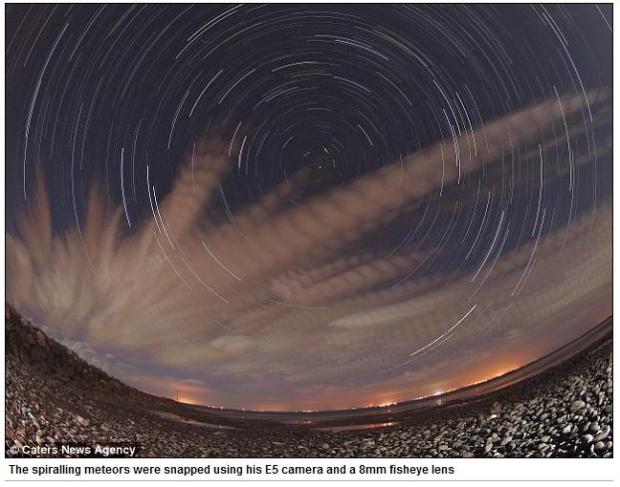 Am I being pedantic? I don’t care; the “spiralling meteors” are not meteors, they’re stars! As the Earth turns, the stars seem to rotate around the Pole Star (the “stationary” speck of light in the centre of the image), and if you take a long exposure photograph of them they seem to draw circles in the sky. Now, there are meteors in this image but they are not spiralling and they are, err, a bit tricky to see, especially since The Mail has squished the images down to web resolution.

Edit: After I’ve complained about the Mail squashing the image too much, WordPress has gone and squashed it even further. Click on the images to view them unsquashed.

Can you see them? They’re more visible in the full size version, and they do not spiral. In fact, that’s how you tell a meteor from a star – the meteor moves so quickly that the rotation of the Earth has no effect on its apparent path, so it blazes in a straight line across the sky. All in all, this is a great star trail picture, but it’s not the best meteor picture ever, and the way The Mail has presented it means it’s not a meteor picture at all.

As the photographer Mark Humpage says on his website:

The bright moon made watching/capturing difficult this year and the very wide angle shot makes for a good composition but lesser meteor detail.

Incidentally, there are a lot of really good photos on Humpage’s website – not just of stars and satellites, but hurricanes, icebergs and aurorae too – and, unlike The Mail, he knows the difference between a star and a meteor. Enjoy!

This entry was posted on Thursday, 18th August 2011, 14:07 GMT+0100 and is filed under Me being pedantic, Space and astronomy, Too scientific; did not read. You can follow any responses to this entry through RSS 2.0. You can leave a response, or trackback from your own site.