Posted by atomicspin in Does not compute, Me being pedantic, Metric and measurement, Space and astronomy on Sunday, 10th July 2011 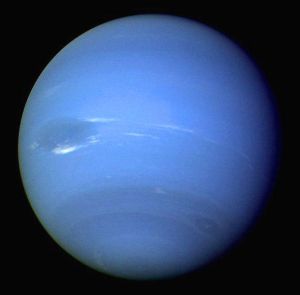 Just a quick post: according to The Observer, tomorrow (July 11) will be one Neptunian year since the discovery of the planet Neptune. Except…

Neptune’s birthday is today, not tomorrow! We’ll all be celebrating on the wrong day!

Never mind phone hacking, this is the real scandal.

Edit: The BBC is even more wrong, claiming Neptune’s birthday is July 12. The philistines!

Double edit: In fact, it looks like we’re all right! July 10 is one average Neptunian year after the date of discovery, July 11 is the day when Neptune will have made precisely one orbit around the solar system’s barycentre (i.e., its centre of mass when you take the Sun and all the planets into account), and July 12 is the day that Neptune will have made precisely one orbit around the Sun. (A figure of July 13 is floating around as well, most likely as a result of an Indian newspaper article which has taken timezones into account). Thanks to Up, Blogstronomy and the Wikipedia users on Talk:Neptune!

Posted by atomicspin in Damned lies and statistics, Health & medicine, If you tolerate this then your children will be next, Sex, Total Perspective Vortex on Wednesday, 5th January 2011

Happy new year to everyone!

I don’t normally mention TV news here, but they can slip up too. Channel 4 News yesterday ran a big, scaremongering piece about one simple statistic: 584 people with contraceptive implants became pregnant.

This might be newsworthy, except Channel 4 forgot to mention two rather important things, subsequently picked up on by the BBC.

First of all, the data in question covers 11 years, not just one year.

Secondly, over that time, the implant has been used by around 1.4 million women.

Now fair enough, presumably not everyone who got pregnant after using Implanon reported it, and contraceptive failure is always regrettable. 584 pregnancies among 1.4 million users however means that the implant did not fail in 99.95% of patients. That is very, very reliable in medical terms.

For comparison, vasectomy is 99.9% effective, an IUD is 99.8% effective, the pill is 99.7% effective (when taken properly; people missing doses means that in real life, it’s only 92% effective on average) and condoms are 98% effective (again, when used properly).

It’s always good to make sure people are completely aware of the relative risks of any type of contraceptive (and indeed any medicine), but using these 584 pregnancies as a sign that there’s something wrong with the implant, without any kind of context or an explanation, isn’t going to do this. All it will do is scare people – as Channel 4 have now realised. They’ve since released another article, “Implanon implant: what to do if you’re worried“, which explains:

You do not need to speak to your doctor unless you are very worried and need to have your mind put at rest.

As long as you can feel the implant, there is no cause for concern. The implant is still a very popular, safe and reliable method of contraception.

No method is 100 per cent effective but only a tiny number of women using the implant have got pregnant.

Good advice, but they should have put that in the actual article yesterday.

What do you think the odds are that this story:

isn’t quite as astonishing as it sounds?

Dancing around the facts

Posted by atomicspin in Churnalism, Psychology, Sex, Too scientific; did not read on Wednesday, 8th September 2010

Thanks to This Wicked Day for the tip.

Remember The Office? That show that was popular circa 2002? Today, the newspapers finally have an opportunity to use up the stash of photos of David Brent dancing that they clearly built up during the fat years.

Every news outlet today covers an article which recently appeared on the pre-print servers of Biology Letters: “Male dance moves that catch a woman’s eye“, by a team from University of Northumbria headed by Dr. Nick Neave.

What do they say?

MEN swinging their arms too much is a dance floor turn-off for women, scientists said yesterday.

Windmill movements like David Brent in TV’s The Office are signs of “bad” dancing, a study found. (The Sun)

Running on the spot, windmill arms and spinning may attract ridicule on the dance floor but it will also attract the opposite sex, claim psychologists. (The Telegraph)

MEN trying to impress women on the dance floor with the slick, cool moves of John Travolta in Saturday Night Fever are making a mistake. (The Express)

Psychologists have found that over-the-top fancy routines and nifty footwork are not what women want. (The Express)

If you use big body movements and fancy footwork you may look like a show off but subconsciously women will desire you. (The Telegraph)

This is just getting silly.

END_OF_DOCUMENT_TOKEN_TO_BE_REPLACED

Posted by atomicspin in Hate our competitors!, It's the stupid economy, Not science at all on Friday, 3rd September 2010

Never let it be said the Mail won’t take any opportunity to attack the BBC. Yesterday it was over left-wing bias*, today it’s over right-wing bias.

The BBC was caught in a political row last night after its boss Mark Thompson was apparently attempting to cosy up to the Government following complaints over Left-wing bias.

The corporation’s director general was photographed arriving at No 10 clutching a memo insisting the BBC is ready to put its coverage of public spending cuts into ‘context’.

The move will prompt claims that the broadcaster is trying to curry favour with an increasingly hostile Coalition Government to preserve its generous licence fee funding.

So wait, has it been caught in a row yet, or not? There’s no mention in the article of anyone objecting to the memo, and the only verification is from an anonymous BBC source.

The claims in this article come from a single partially obscured telephoto shot of Thompson carrying a document written by the head of news Helen Boaden describing a meeting with the coalition’s Director of Communications Andy Coulson (who is incidentally involved in a much larger scandal that the Daily Mail have curiously forgotten to report on). Does the document support the Mail’s claims? Let’s see. Here’s a transcription of the relevant parts of the memo:

For background which may help…. I had lunch with Andy Coulson […]

concerned that we give context to the Spending Review Season (I[…]

a range of voices on all the issues.

Over the summer, we have mostly been driven by news lines and […]

leaked letter from the Justice dept. Phillip Green being brought in, […]

milk being axed and then restored, criticism of the OBR and the […]

the poorest would be hardest hit by the Spending Review implic[…]

tried to put in a broader context.

* Despite how the papers tried to spin it, Thompson was only talking about left-wing bias in the 1970s.

The grace of the God particle

Posted by atomicspin in Physics, Too scientific; did not read, Total Perspective Vortex on Saturday, 24th July 2010 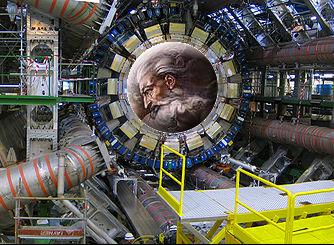 The Higgs boson... will probably not look like this.

A BBC article today on the apparent confirmation of the top quark at the LHC, plus a discussion with a friend about about Thursday’s episode of Newsnight (specifically, the part about science funding), got me thinking. Why do we – the public and the media – care so much about the Higgs boson?

There are dozens of proposed but undiscovered particles which physicists are currently searching for, both in the LHC and elsewhere: the graviton, the WIMP, the whole host of supersymmetric partners, perhaps – although rather less likely – even tachyons and strings. In some ways, these are more important than the Higgs – the Higgs boson is a bit of a dead end, scientifically speaking. If we find it, we’ll finish the Standard Model, but it’s unlikely to shed any new light on physics – especially since we’ve spent the last 30-40 years working under the assumption that it does exist anyway.

END_OF_DOCUMENT_TOKEN_TO_BE_REPLACED

Both articles are about the release of some of Shipman’s personal correspondence released as part of a BBC documentary to be shown this evening. The release of the letters is a relatively small part of the documentary, which actually focuses mostly on foot-dragging by the government on reforms to death certificates and the licensing of doctors. While both the newspaper articles do mention the lack of reform, the bulk of the articles is about the letters (letters that the victims’ families did not want released, by the way).

END_OF_DOCUMENT_TOKEN_TO_BE_REPLACED

How bad were England?

The most even-handed headline I could find today on England’s 4-1 loss to Germany is BBC News’s “Germany knock out dismal England“, though I like the alliteration in the The Sun‘s headline “Fabio’s flops“. “Dismal” – that’s a strong word. Was the match really dismal? All the papers agree England’s performance was weak, and certainly you can’t say there was much in the way of decent defending from England but, from a historical perspective, was it all that bad?

The statistics I’m using come from EnglandFC.com for England data, and RSSSF.com for German data (using West German data for pre-1990 results – the data does not include the World Cup, so that’s been taken from the FIFA site). All data runs the range 1950-2010 – both England and Germany appear to have remained roughly constant over the period, so I’m basically using as much of the data as is meaningful (pre-1950, England did not often play internationally, and Germany was an extremely different country).

First of all, how has England done this World Cup?

END_OF_DOCUMENT_TOKEN_TO_BE_REPLACED

I’m currently pushing to make one a post a day for at least the first week of this blog, and sadly, the press is not playing along. Despite it being a Saturday – the day when traditionally newspapers pad out their pages with Omega-3 fluff pieces and Men are from Mars, Women are from Venus-esque behaviour studies – the press is quiet on the subject today; presumably because the are enough serious stories out there.

So instead, here’s a little random musing on the papers themselves.

Health is perhaps the only universal subject a newspaper can cover. Not everyone lives in a given area, not everyone has children, not everyone owns a car or uses trains, not everyone shares the political beliefs of the editors. Not everybody pays taxes even, which leaves us just one of the two great certainties: death. As a result, health news is perhaps the greatest lure to bring readers in. Every level of journalism indulges in it, from the 20p gossip magazines with covers full of grotesque medical horror stories to The Observer and The Sunday Telegraph telling parents that if they aren’t filling their children up with superfoods and handmade organic risotto then they might as well be child abusers.

This means that if you’ve got a boring story that probably won’ t get any readers, all you need to do is give it a medical spin, have a mid-level academic or a spokesperson for The Society of Homeopaths give you a nice juicy quote, then stick it in the health pages. Observe: